Shopping Cart
Your Cart is Empty
Quantity:
Subtotal
Taxes
Shipping
Total
There was an error with PayPalClick here to try again

Thank you for your business!You should be receiving an order confirmation from Paypal shortly.Exit Shopping Cart

I picked up a set of those uppercase alphabet stamps for $2.50 at the Target Dollar Spot this summer.  I later saw this kindergarten blog post http://keenonkindergarten.blogspot.com/2011/07/dear-target.html where the teacher suggested that she was going to have her students stamp play doh with them instead of ink and paper.  I love this idea on so many levels!  We tried it today.  It is just the fifth day of school, so some of the kids were stamping their names, others were just experimenting with the whole idea of rolling out the play doh and pressing the stamps in.  It was a big hit! 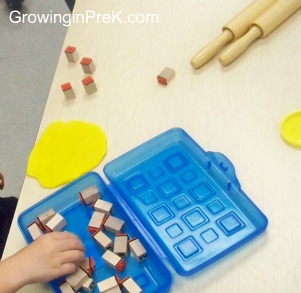